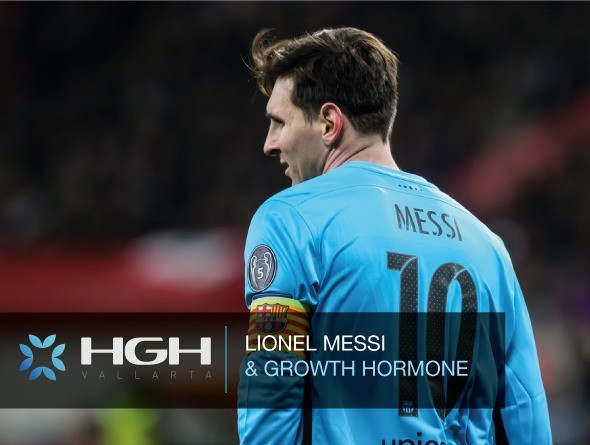 Think about Barcelona, which name comes to mind? Messi, right?

Messi is arguably one of the best players this world has ever seen. His professional track record is decorated with numerous awards including player of the year, Ballon d’Or, golden boot among others. Messi’s track record has inspired admiration and skepticism in equal measure. Many skeptics and critics have been particularly interested in the history of Messi’s HGH therapy.

Did Messi use HGH therapy?

Yes, he did. Now, before you jump to conclusions, he had a pretty good reason to do so.

For those who aren’t in the know, the Human Growth hormone is a chemical produced in the body. HGH therapy controls growth and development. For a person to successfully navigate puberty into adulthood, one must have adequate levels of HGH in their body.

What many people don’t understand is that when he was eleven years old, Messi was diagnosed with growth hormone deficiency. That meant that despite his natural talent in the field, he wasn’t able to go professional. You see, with inadequate levels of growth hormones, Messi would have developed weaker bones, poor muscle bulk, central obesity, and short stature. These features would have prevented him from playing in a professional capacity.

How then did Messi HGH treatment affect his game?

After he was signed by Barcelona, Messi underwent extensive HGH therapy to boost his growth hormone levels. The therapy involved being treated with recombinant growth hormone therapy. Here are some of the benefits he might have ripped from the therapy.

According to his doctors, had they not intervened, Messi would have grown to a height of 150cm, which is 20 cm short of his current height.

His newfound height came with the advantages of longer strides. Being 170cm tall, he still is among the shortest players in the league, giving him the advantage of reasonable strides and a low center of gravity and stability.

Those who’ve seen Messi play would attest to his dribbling prowess and he rifts through defenders without falling.

Let’s say that HGH therapy gave Messi a height boost just enough to see him play professionally without tampering much with his center of gravity.

Doctors have established a clear relationship between HGH therapy and wound healing. In a study done by Gillberg et al., the use of recombinant HGH therapy showed a general increase in the bone mineral density and the bone mineral content. Both attributes are beneficial for football players facing risks of bone and soft tissue injuries.

Since 2013, Messi has suffered a total of twelve injuries, the worst being a torn muscle in 2014 which saw him miss ten games. Other than that, he only took few days to recover from the other injuries.

Whether his sprint is directly related to his use of HGH therapy is unknown. What we know for a fact is that the use of HGH has been proven to improve sprint time among athletes.

Speaking about the study of HGH on athletic performance at Garvan, Professor Ken Ho had this to say

“In conclusion, growth hormone increases athletic sprinting when given alone or in combination with testosterone…”

Professor He who was among the research heads, believes that the effects of HGH might be much greater than their findings.

Messi’s performance in the field has seen him attract criticism from his competitors about Messi’s growth hormone therapy. Can we say that he is where he is currently entirely because of HGH? Not at all. What we can say though, is that the use of HGH has definitely played a pivotal role in getting him there.

Would you use HGH if it meant your life would be better?

PrevPrevious ArticleHGH Deficiency in Children
Next ArticleWhat Do Payton Manning and Lebron James Have in Common? Perhaps, Human Growth Hormone?Next

Google
I have worked with Damian and his team at HgH Vallarta for over 4 years over which time I’ve mad 4 trips down there. It’s a seamless operation. They will pick you up from the airport and drop you back off if you’re not flying immediately back out. The blood draws, physician prescription, Covid testing (as of this year), and packaging of the drugs in easy to carry soft cooler containers happens all in about twenty minutes. They’ll come and do all of that at the place you’re staying so you aren’t inconvenienced in the slightest. I’ve never had a single issue going back through customs (this isn’t illegal). And I’ve never felt better. I sleep better, have more energy, more excitement about things I’d somehow stopped finding pleasure in, have lost weight and have a healthy sex drive again. Highly recommended for those looking to keep the vibrancy of youth and keep the ravages of aging at bay!

Google
First time shopper. I never make reviews but decided to because this was a big investment. Whatever your situation is or your needs, I can tell you that this was pretty smooth. I had a family member who needed this so I decided to help them out since I was going to Mexico. The communication was great and timely. I'm not going to lie I was pretty annoying, but they responded each time and even spoke on the phone with them a few time. I decided to to do as I mentioned because of a family member. Sent the wire transfer, hoping this was legit. I flew into cancun. The most annoying part was finding the package area for the transport company. No one knew where it was (not their fault). I was a little Intimidated when I picked up the package since it was a big cooler. I got to my hotel and opened it up. Everything was nicely wrapped and contents intact. In the cooler there were ice packs still frozen and 2 of those lunch boxes cooler bags. I put everything in the fridge and froze the ice packs. So really everything went smooth. Only annoying thing was getting to the package area. Be sure u have enough space for the 2 lunch bag coolers and the accessories. So no complaints. If I find myself going back for my family member I would definitely use them again

Google
Contacted HGH Valletta about a month ago and spoke with Damian who is very professional and informative about HGH and all of his products that he has. Damian instructed me on how the bank wire process worked and what would be needed on both ends of our transaction. A week before my arrival to Mexico I wired over my money and after my transaction was completed I was given a phone call from Damien to verify he got the transaction. The next day and before my arrival I was given the correct paperwork with a tracking number for my products I will need to pick up my order. I chose to pick up at the airport. The day I arrived in Mexico I simply went to the correct location and building where I was instructed to go. I handed the airport staff my correct paperwork and they handed me back a cooler which had all my correct products and also contained my doctors note which I would need when I headed back over the border. When crossing the border I Handed the border officers my paperwork they then checked me out for a few minutes and I was on my way. I will definitely do business again with HGH Vallarta it was a very smooth professional transaction.

Google
Damian and his team (Leon was right on top of my order) do a great job! The product is excellent quality and so is the service. I am a repeat customer. Highly recommended>

I would use again without reservation.

Google
Im writing this review about my experience with HGH Vallarta. I would like to note that I am not a patient but I am a spouse of a patient that has recently gone through this company. I too was simply involved in the transaction by accompanying my husband with traveling to pick up his proscription in Mexico.

I am surprised and incredibly impressed by the service and quality of the products my husband has purchased from Damian and HGH Vallarta! Due to the epidemic we did not travel to Puerto Vallarta, my husband was given detailed instructions on how to pick up his purchase from the Tijuana airport. Because we have never traveled for medication or any medical assistance outside of the US, I was incredibly nervous by the whole process and had a bit of doubts due to fraud and the expense of the wire transfer. My husband explained how easy and effortless the process would be and I felt as though it was too good to be true. My husband was in contact with Damian during our travels which put us at ease. After experiencing some trouble with our flight we were able to contact Damian on a Sunday morning with no issues whatsoever after that he felt WAYY more comfortable!! He was able to travel through the California border to enter Mexico and once he arrived there had no issues picking up his medication! Neither I nor my husband had the pleasure of meeting Damian but are contactless pick up went smoother than either of us could’ve expected.

Everything was exactly as explained as advertised and Damian was able to assist him through the whole entire process including providing him with paperwork to travel with the meds in the United States!

If you are looking for a company to purchase HGH through and you live in the United States, Damian and his company will definitely take care of you! His services are 100% legit and his products are top quality and very affordable. Compared to the US pricing for the same products it’s an amazing deal!

Thank you so much & we look forward to working with you in the future!

Google
I moved to Mexico and contacted the HGH Vallarta team. The HGH is legit and the service was mazing. Delivery to your door. What else can you ask for. Will be a repeat customer.

Google
I am a new user of this product< just under a month> and am noticing improvement in my skin condition already. I am impressed! Thank you

Google
Great service since the very beginning, very helpful staff, they were in communication with us all the time, very professional service

Google
Damian was great, prompt and very easy to deal with. The only hiccup was coming back to the US with testosterone. Customs took it even though I had a valid Mexican prescription.

I am still working out the details on this but Damian and his staff were great to work with.
Read more...
5
Excellent